Minority communities fighting back against disinformation ahead of election 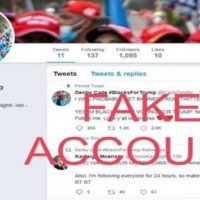 (WASHINGTON) — Russian election interference, Iranian emails, falsities trumpeted by government officials and the explosion in popularity of online conspiracy theories have combined into a deluge of misinformation that’s left many American voters swimming upstream. Some advocates are working together to build a bigger boat.

Before many had even heard of Russian troll farms, back in 2014, Shafiqah Hudson and I’Nasah Crockett, two Black Twitter users with no technical or law enforcement background, helped curb disinformation by using an inventive hashtag.

Hudson spotted a number of Twitter accounts purporting to be Black feminists that appeared to be purposely sowing division, calling for an end to Father’s Day and using the hashtag #endfathersday.

An online friend of Hudson’s, Crockett did some digging and discovered a few of these bad actors discussing tactics and boasting of their success on the website 4chan, a fringe social media platform that became a forum for right-wing hate speech and from which QAnon emerged.

Hudson began outing the fake accounts with the hashtag #yourslipisshowing — the hashtag stemming from a southern saying for something that’s supposed to be concealed but suddenly is on full display.

“It was our way of saying, ‘Hey, this thing that you think you’re hiding, everyone sees it,’” Hudson added.

The hashtag did have some success in curbing the disinformation — some of the accounts were taken down and some just stopped posting when tagged with the #yourslipisshowing — but many persisted for a long time.

A few years later, after the Cambridge Analytica scandal broke, the Mueller Report revealed that minority communities — Black communities especially — had been targeted by Russian trolls.

Both Hudson and Crockett are again seeing this kind of content circulating. They believe working together as a community can help counter it.

“I think they’ve learned,” Crockett said. “There’s a little less attempt to try and directly talk to a person and use AAVE, which could be incorrect, and more just an attempt to muddy the waters by just dumping information, overwhelming people, so you don’t even take the time to look up the source.”

The “More than a Vote” campaign is raising awareness and has the backing of celebrities such as Kevin Hart, Patrick Mahomes and LeBron James, who tweeted a video aimed at countering misinformation and voter depression. Disinformation experts from First Draft define voter depression as efforts to discourage voters from attempting to vote, whereas voter suppression is action taken to prevent people from being able to cast their votes.

Recognizing this would be a problem in 2020, and beyond, Amalia Deloney of the Media Democracy Fund…


Read More: Minority communities fighting back against disinformation ahead of election