&pictures focuses on youth with its brand new ethos ‘On Nahi, Full On’

MUMBAI: Hindi movie channel &pictures is revamping its brand image to appeal to a new generation of viewers with the launch of a refreshing new ideology and tagline – ‘On Nahi, Full On’.

Built on the insight that ‘In a world that uncertain, why stop myself from immersing fully in what I do’, &pictures’ new brand philosophy of ‘On Nahi, Full On’, seeks to ignite the spark of aspiration among young viewers and inspire them to take charge and maximize every moment without slowing down.

Launched by Zee Entertainment Enterprises Ltd in 2013, &pictures has always catered to an audience with a youthful mindset with an array of content and characters that reflects their life choices and beliefs.

Explaining the rationale behind the revamp, Zee Hindi Movies Cluster business head Ruchir Tiwari told indiantelevision.com that the channel is looking at strengthening its current portfolio that it has built over years by refreshing content.

“The audience that was there when the channel was launched has now changed. The idea is to appeal to younger audiences. Overall the logo is the same but we have added new colours and we have changed the positioning,” he said.

According to Tiwari, the channel did extensive research before designing the logo. The pre-packaging was done by the internal design team along with various collaborators.

The channel has come up with a two-pronged content strategy: keeping the new-age sensibilities in mind to strengthen its bond with its core viewers; and to engage and bring in new viewers. &pictures is improving its movie library with fresh and exciting new entrants like Good Newwz, Dabangg 3, Kaali Peeli and Gunjan Saxena. The channel has also introduced a slew of original and off-beat flicks: Footfairy, Omerta and Hacked, amongst others.

For Hollywood fanatics, &pictures has slated blockbuster premieres like Bumblebee, Fantasy Island & Bloodshot along with the latest installments of viewers’ favourite movie franchises like Kung Fu Panda, Jumanji and Transformers, to name a few. 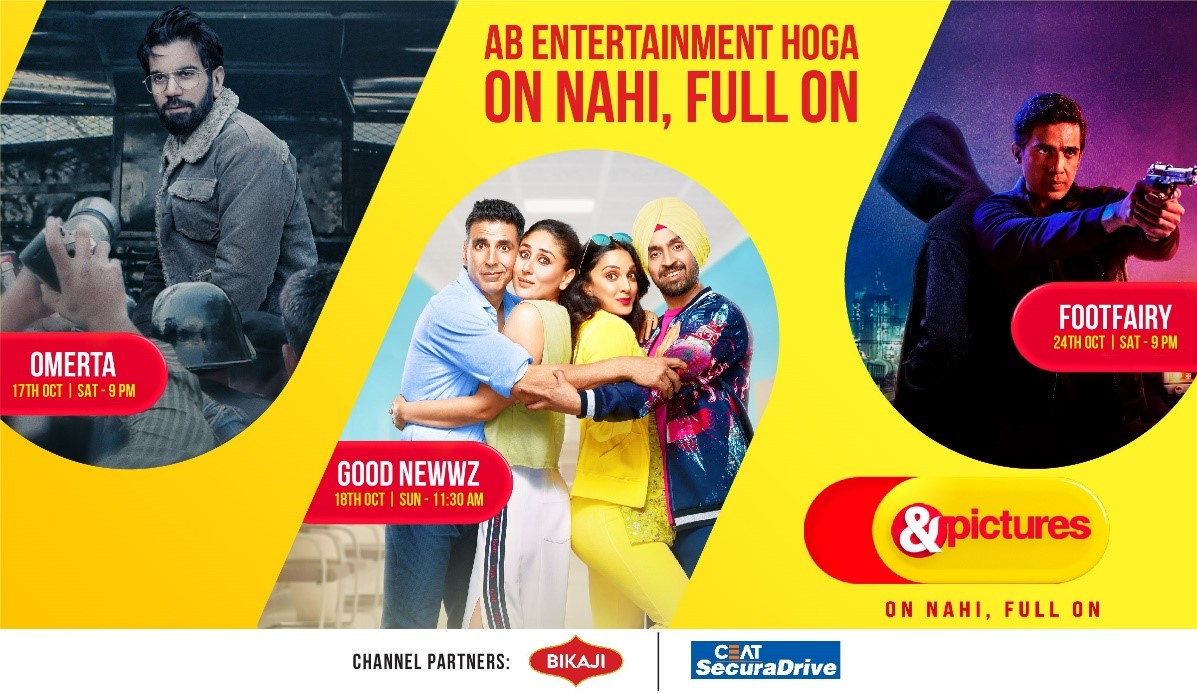 In an age where the audience is turning to OTT and streaming services, it is important to reassure the consumer about the channel’s proposition, emphasised Tiwari. “Forming a habit among consumers also comes with a huge responsibility where you need to be on your toes. We’re striving constantly to get better content and create relevance through social media,” he added.

In keeping with its revamped ‘On Nahi, Full On’ ideology, &pictures has kicked off the ‘Full on Bloc Party’ campaign on its social media channels. Through collaborations with talented young stars like Ishaan Khatter, Dhvani Bhanushali, Dolly Singh & Nikhil Paralikar a.k.a the Tabla guy, the brand is promoting its ethos of Full on Feels, Full on Masti, Full on Punch and Full on Thrill.

&pictures shorties, conceptualized by Lowe Lintas, will be promoted extensively across television and digital media. To up the fun quotient, the…


Read More: &pictures focuses on youth with its brand new ethos ‘On Nahi, Full On’


Bombarded with information – the challenge of crowded digital channels