If you’re someone who pays attention to Asian dramas in general, then you’ve probably noticed C-drama “Go Ahead” on your social media timeline. This is a drama that will make you swoon, laugh, cry, and gasp all in one episode, and leave you with a warm-tingling feeling in your heart. The story is centered on a non-blood-related family unit of five and their relationships with their other family members as well as their friends.

As is life, we see the three siblings Ling Xiao (Song Wei Long), He Zi Qiu (Steven Zhang), and Lee Jian Jian (Tang Song Yun) experience growing pains while maturing and going through various struggles and hardships. But through it all, they have each other, they have their families, and they have their friends to help them through. 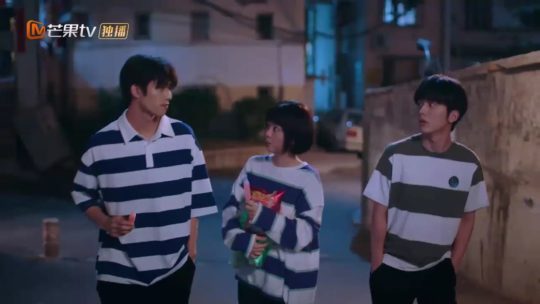 Ling Xiao, Jian Jian, and He Zi Qiu, all in adorably matching tees!

While there are plenty of parts in the drama that will have you sobbing and reaching for the tissues, there’s also a super adorable romance that adds a dash of sweetness to everything. And that romance is between none other than Ling Xiao and Jian Jian. Ling Xiao pulls of the swoony lines so well, and we, like Jian Jian, easily fall under his spell.

Here are some moments between Ling Xiao and Jian Jian that have us reminiscing about them even now. (List doesn’t include the 300 head pats, hand holding, and shoulder hugs):

When Ling Xiao becomes a dentist

Jian Jian has always been afraid of going to the dentist ever since she was young, but her massive sweet tooth makes these trips inevitable. One day during their teen years, after Ling Xiao takes her to the dentist, Jian Jian casually mentions that if he were a dentist, then she wouldn’t be as afraid.

This little passing remark is planted in Ling Xiao’s heart, and years later, he actually does become a dentist. The things this man does for Jian Jian!

When Ling Xiao returns from Singapore

When Ling Xiao’s mother gets in an accident, Ling Xiao travels to Singapore to take care of her. Ling Xiao and Jian Jian have video calls during their time apart and he asks her to do aegyo for her to ease their longing (which she does without any hesitation). And when he finally comes back, she leaps into his arms and refuses to get down. They’ve barely been apart before, so it’s easy to see why they miss each other so much.

When Jian Jian learns Ling Xiao is leaving for good

Jian Jian learns that both her brothers, Ling Xiao and He Zi Qiu, will be going overseas for good after their high school graduation. This comes as a major shock to Jian Jian, as their plans were always to go to Beijing to study together. She feels betrayed by this sudden change of heart, so she hides out in her room and cries under the blankets. Ling Xiao goes to comfort her, but she’s too heartbroken to hear anything he says, firmly believing that once they leave, they wouldn’t be her brothers anymore. And that’s when Ling Xiao says, “When you grow up, let’s be…


Read More: 8 Swoony Moments From The OTP Of “Go Ahead” That We Still Think About

Five ways to be the change we want to see